Energy drinks are becoming more and more popular around the world as a way to boost energy levels, especially for people with physically demanding jobs. Contrary to common belief, most energy drinks nowadays do not contain table sugar. Instead, they have artificial sweeteners such as aspartame, acesulfame potassium, erythritol, and sucralose. 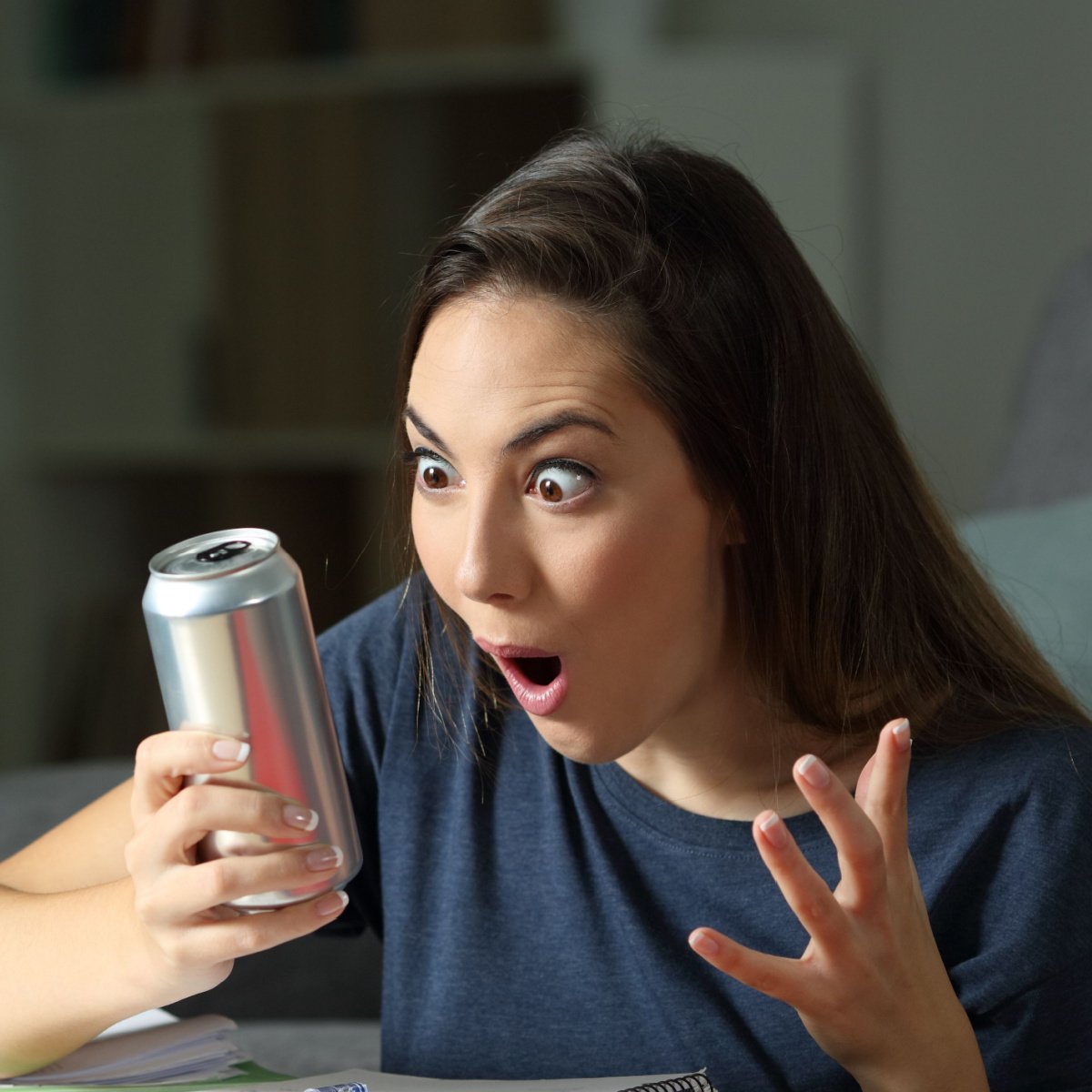 While most people think that artificial sugar is a good thing, prolonged use of sucralose could lead to inflammation, weight gain, increased risk for diabetes, and an unhealthy gut.

Read on as I discuss each brand, focusing on their ingredients, caffeine content, and the sweeteners used in their drinks.

Sucralose, also known as Splenda, is a zero-calorie artificial sweetener used as an alternative to sugar since the late 1990s. It is a form of chemically altered sugar that the body cannot metabolize, making it an option for those wanting to cut calories or refrain from table sugar.

Sucralose is 600 times sweeter than sugar and is heat-stable, making it suitable for baking and cooking. You'll often find sucralose in sweet products such as soft drinks, jams, and yogurts.

Because it does not provide calories or carbohydrates, it is a popular choice for those managing their weight or blood sugar.

However, sucralose does have some downsides, as it has a negative impact on people with diabetes as it decreases insulin sensitivity, which means that your cells will not respond to the glucose in your blood, causing your blood sugar to increase. 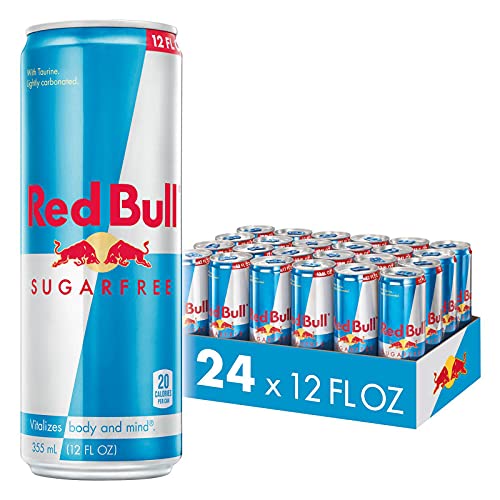 Red Bull is an energy drink made by Red Bull GmbH, an Austrian company that started in 1987. Red Bull has the world's highest energy drink market share, with over 7.5 billion cans sold (as of 2019).

You can find Red Bull in over 167 countries, and it is available in multiple flavors, including original, sugar-free, and zero. Red Bull is mostly made up of caffeine, the amino acid taurine, sucrose and glucose, B vitamins, and carbonated water.

The original recipe for Red Bull energy drink has 80 mg of caffeine per 250 mL can, which is the same amount as in a cup of coffee.

The main variant of Red Bull is the original flavor, which does not contain sucralose. This flavor is a combination of sweet, slightly sour, and salty that has remained unchanged since its launch in 1987. Red Bull's sugar-free variant does not also contain sucralose.

Red Bull also has Red Bull Zero, which contains the same ingredients as the original but with added sucralose and acesulfame K as sweeteners. 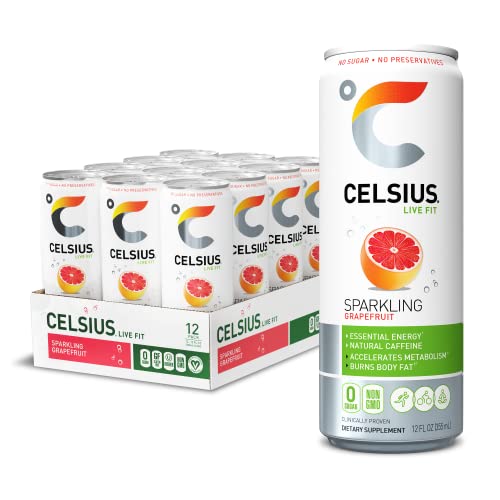 Celsius Energy Drink is a line of performance energy drinks designed to help you stay energized and productive.

The main active ingredients in Celsius Energy Drink are caffeine, green tea extract, guarana extract, ginger extract, and vitamins B6 and B12, which all increase mental alertness and focus.

Each serving of Celsius energy drink provides a minimum of 200 milligrams of caffeine, which is more than twice the caffeine in a cup of coffee.

Although CELSIUS energy drinks do not contain calories or artificial colors or flavors, most of their variants contain sucralose, except for the Celsius Stevia. 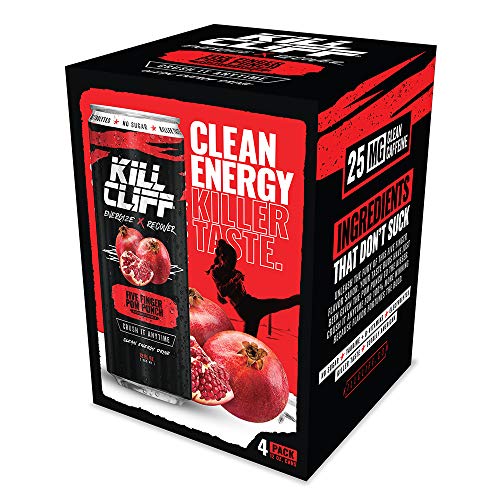 Kill Cliff is a perfect blend of B-Vitamins, Electrolytes, Plant Extracts, and Enzymes with only 25mg of clean caffeine from Green Tea extract to prevent a crash.

Kill Cliff Energy Drink is a line of functional energy drinks made in Atlanta, Georgia. The company was founded in 2012 with the goal of providing athletes with healthier energy drinks.

Kill Cliff Energy Drink variants do not contain sucralose; their main sweeteners are erythritol and stevia. 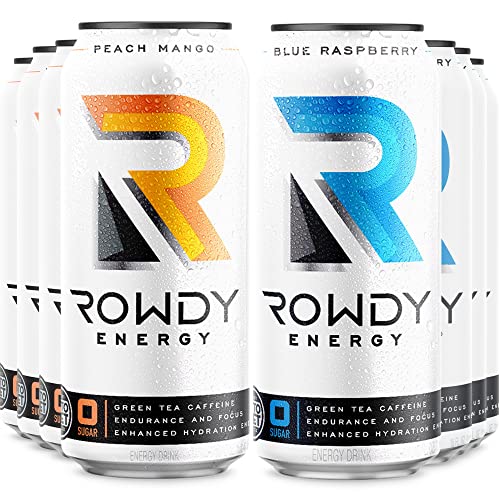 Although the Rowdy energy drink looks promising, with 160 milligrams of caffeine per can, it does contain 18 grams of added sugar and a total of 24 grams of carbohydrates.

Both the Original and Citrus variants do not contain sucralose; their main sweeteners are erythritol and stevia. 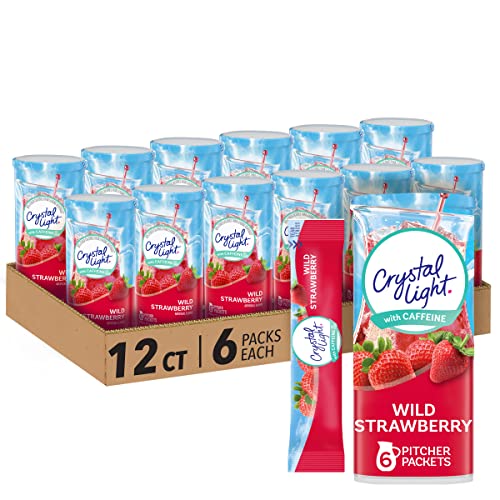 Crystal Light is a flavored beverage mix owned by Kraft Heinz that comes in powdered form and is designed to dissolve in water. It comes in various flavors, including cherry pomegranate, classic orange, fruit punch, raspberry ice, strawberry kiwi, and strawberry banana.

All Crystal Light variants do not contain sucralose; their primary sweetener is aspartame. 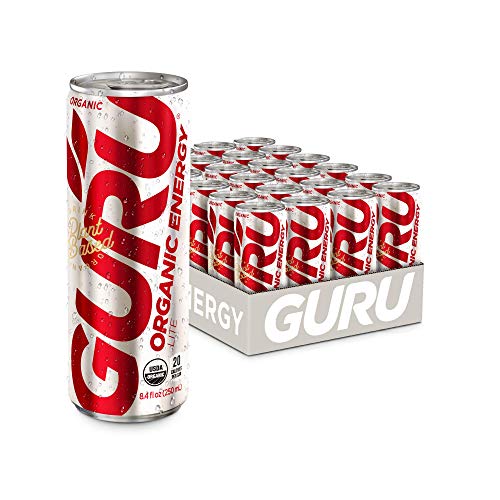 Guru Energy Drink is the world's first all-natural energy drink brand, founded in 1999, that produces a variety of energy drinks to help people get energized, alert, and focused. The company has several flavors of energy drinks, including Original, Lite, Matcha, and Yerba Mate.

An 8-oz can of Guru energy drink contains 100 milligrams of caffeine, while a 12-oz can contains 140 milligrams.

All Guru energy drink variants do not contain sucralose; their primary sweeteners are stevia and monk fruit extract, both natural sweeteners. 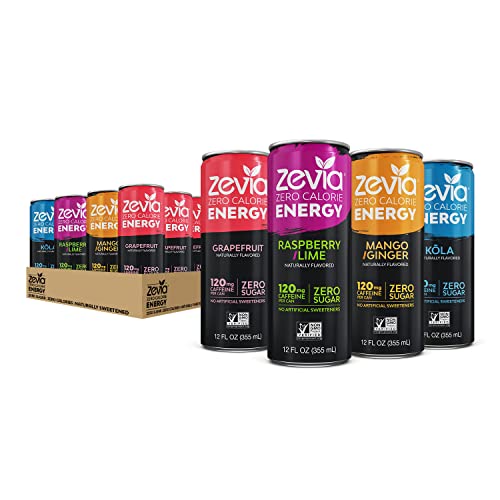 Zevia is a natural and calorie-free energy drink company based in Los Angeles, California, specializing in crafting zero-calorie, flavorful beverages made with only natural ingredients.

Their drinks, as the name implies, use stevia as a sweetener, a plant-based sweetener, and are available in cola, ginger ale, orange, lemon-lime, and other flavors.

The caffeine content of Zevia energy drinks varies depending on the flavor. Most of their drinks contain between 20 and 80 milligrams of caffeine per 12-ounce can, except for their Zero Calorie Cola, which has no caffeine.

All variants or flavors of Zevia do not contain sucralose, as they use stevia as a sugar substitute in all of their products. 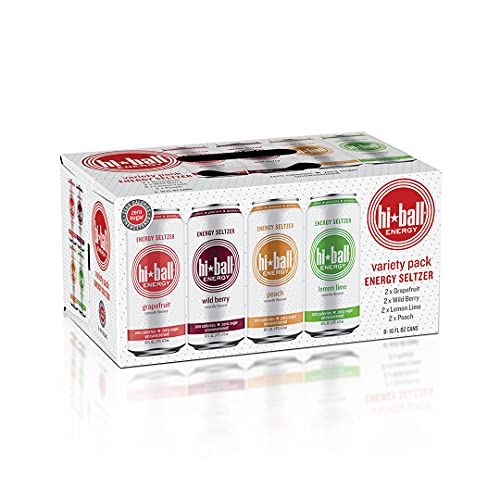 Hiball is an energy drink company based in San Francisco, California. The company produces a range of energy drinks that contain a blend of vitamins and natural ingredients.

Hiball energy drinks are among the few that contain high amounts of B vitamins. For instance, a can contains 150% of your daily niacin, B6, B12, and pantothenic acid needs.

The caffeine content of Hiball energy drinks varies, with most having around 80 to 100 milligrams per can. Additionally, the company has developed a range of energy drinks formulated with natural ingredients like organic caffeine from green tea extract and ginseng.

Unlike most energy drinks with added sugar or artificial sweeteners, Hiball offers a clean taste by not using any sweetener, including sucralose. Consumers describe this carbonated drink as "luxurious sparkling water." 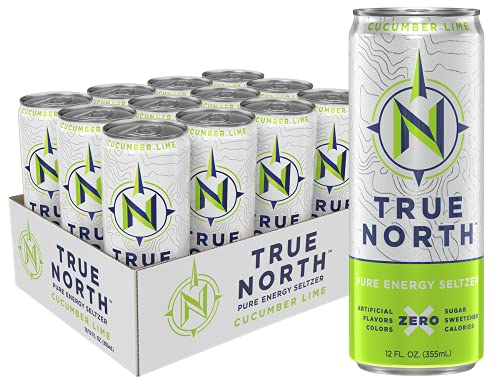 Their drinks come without artificial colors, flavors, or preservatives and have zero sugar. They are also gluten-free, vegan, and non-GMO.

The ingredients in True North carbonated drinks vary depending on the flavor. Still, all the drinks contain carbonated water, caffeine, guarana, green tea extracts, ginseng, and vitamins such as vitamin A, vitamin C, niacin, the B vitamins riboflavin and niacin, vitamin B6, pantothenic acid, and zinc.

All variants or flavors of True North energy drinks are seltzer water or sparkling water and do not contain any sweetener, including added sugar or artificial sweeteners such as sucralose. 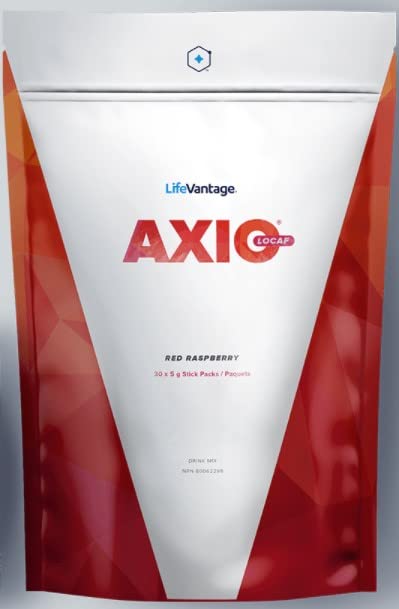 Axio is an energy drink company founded in 2012. Their mission is to provide an alternative to traditional energy drinks by offering healthier and more balanced energy drink mixes. They offer a variety of unique and flavorful energy drinks that contain natural ingredients.

The caffeine content of Axio energy drinks varies depending on the product. Most Axio Energy Drink mixes contain 100 mg of caffeine per pack, dissolved in 12 oz of water. However, unlike other energy mixes, Axio contains 4 grams of total carbs per packet.

All Axio variants do not contain sucralose in their ingredient lists; the company uses stevia, a low-calorie sweetener. 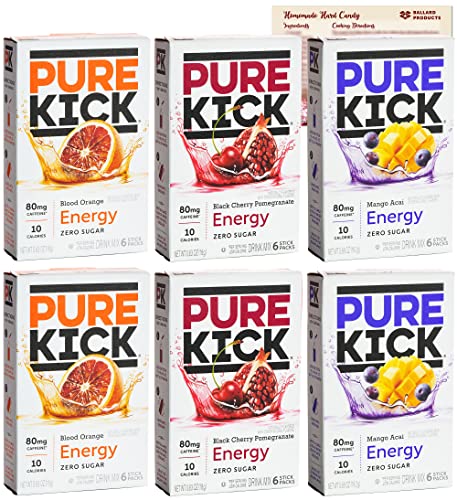 Pure Kick offers three flavors: blood orange, black cherry pomegranate, and mango acai. Each packet of this energy drink mix has 2 to 3 grams of total carbs and 100% of the daily recommended amounts of niacin, vitamin B6, vitamin B12, biotin, and pantothenic acid.

The packet also has the amino acid taurine, guarana seed extract, ginseng extract, and citric acid. Each pack contains 4.73 milligrams of caffeine per fluid ounce, or about 80 milligrams for a 16-oz bottle.

Pure Kick Energy Drink Mix variants do not contain sucralose; they use aspartame and acesulfame potassium as sugar alternatives. 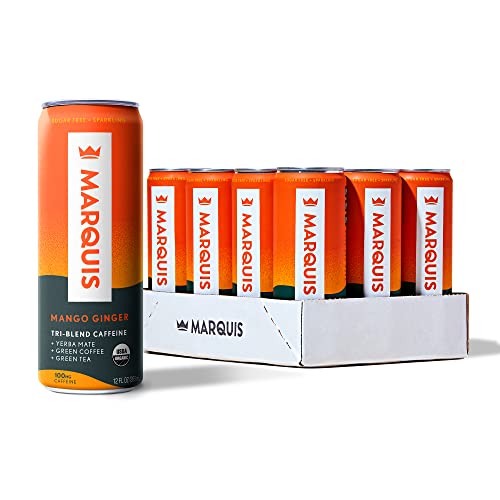 Marquis Energy Drinks is a Canadian-based energy drink brand that has been in business since 1998. They focus on providing consumers with high-quality energy drinks that are natural and free of artificial flavors, colors, and preservatives.

All of the Marquis energy drinks do not contain sucralose. However, they have erythritol, a sugar alternative that still has carbohydrates, which comprise 9 grams of total carbs per can.

Dangers of Sucralose to Human Health

Although sucralose is not technically sugar, it affects your blood sugar levels by affecting your insulin. Insulin is a hormone that helps the body store and use sugar from food.

Recent studies show that consuming sucralose can increase insulin levels, decreasing the body's ability to respond to insulin, a condition known as insulin resistance or reduced insulin sensitivity. This makes it harder for the body to process sugar, leading to elevated blood sugar levels and an increased risk of developing diabetes.

Another way consuming sucralose can increase the risk of diabetes is through its effect on the gut microbiome. The gut microbiome is a collection of bacteria and other microorganisms that live in the digestive tract.

Consuming sucralose can alter the balance of the gut microbiome, making it less capable of breaking down food, leading to an increase in blood sugar levels and an increased risk of diabetes.

Although the FDA has approved Splenda as a safe sweetener, that does not mean that you can consider it a healthy ingredient to put in your stomach. According to this study, sucralose stresses the gut microbiome and its functions.

By altering the balance of bacteria in the gut, sucralose can increase the number of harmful bacteria and reduce the number of beneficial bacteria. This can lead to inflammation, digestive discomfort, and an increased risk of infection.

Inflammation is the body's response to injury or infection and is generally beneficial. However, in some cases, it can become chronic and lead to long-term health problems.

Studies show that a sugar substitute in a carbonated drink, such as sucralose, can increase the production of inflammatory cytokines, molecules released by immune system cells in response to infection or injury.

In addition, sucralose decreases levels of antioxidants, which help protect the body from inflammation. As a result, the body gets exposed to an increased risk of developing long-term diseases such as obesity, diabetes, and heart problems.

The primary way sucralose may cause weight gain is by disrupting the body's natural hunger hormones. Studies found that sucralose consumption can decrease leptin levels, a hormone that signals when you are full, and increase ghrelin levels, which signal when the body is hungry.

The disruption of hunger hormones can lead to overconsumption of food, ultimately leading to weight gain. Additionally, sucralose consumption can reduce the body's sensitivity to sweet flavors, leading to an increased preference for sweeter and higher-calorie foods.

What is the best energy drink?

Monster Energy Zero Sugar is the most popular energy drink, followed by Red Bull Sugarfree. However, this does not make them the healthiest.

Is there a healthy energy drink?

Although Monster Energy drinks are among the most popular, they are not the healthiest drinks you can have. They contain synthetic additives that may have a negative impact on your health.