Kiwis are a fruit that many people don't eat regularly. While you can find them at almost every local grocery store, they're not as popular as oranges, strawberries, or bananas. 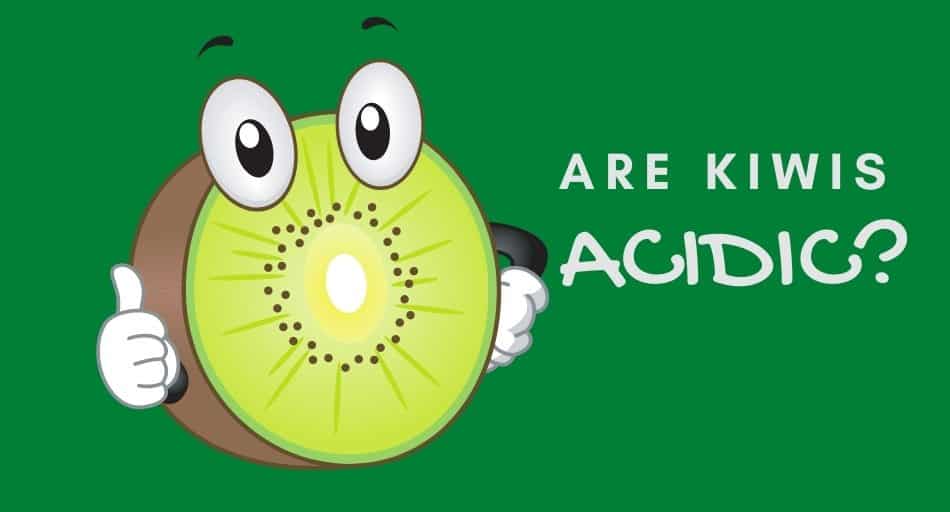 Kiwis are a tangy, sweet, and delicious fruit that makes a great addition to your diet. As sweet as kiwis are, it can be hard to know whether they're alkaline, neutral, or acidic based on taste alone. Are kiwis acidic?

If you have acid reflux disease or heartburn, you may need to avoid kiwis because these little fruits are acidic. The pH for kiwis ranges from 3.1 to 3.4, making them about as acidic as oranges, maybe even a little bit more. Actually, kiwis' pH rating is more similar to that of lemons and limes, which we know to be very acidic fruits.

If you're wondering if kiwis are healthy or good for you, check out their nutritional profile based on one average-sized kiwi:

Since kiwis are very low in calories, you can eat a good amount of them without adding excessive empty calories to your day. They're a great fruit to eat when you're on a weight loss journey because they're low-calorie and have enough natural sugar to help curb any sweet tooth you may experience.

Can I Eat Kiwi with Acid Reflux Disease?

There's no one stopping you from eating kiwi with acid reflux disease. But, knowing how acidic these fruits are, you may not be feeling your best after you eat them. The best answer to this question is to consult with your doctor before chowing down on some juicy kiwi.

They'll be able to tell you if they think it's okay or how to minimize the acid reflux symptoms you may feel if you choose to eat these fruits.

Where Did Kiwis Originate?

People in New Zealand are affectionately nicknamed kiwis, so many believe that these fuzzy fruits have origins in New Zealand. While kiwis are a popular fruit in New Zealand, they didn't come from there.

The origins of kiwis can be dated back to the 12th century in what is now Southeast China. The 12th century, during the Song Dynasty, is when historians believe people began eating this fruit.

It wasn't until the 20th century when Mary Isabel Fraser, a New Zealand native, brought kiwi seeds back to New Zealand. She was on a trip visiting different schools in China when she tried kiwi and brought seeds back.

Where do Most of the World's Kiwis Grow?

Kiwis are grown in many parts of the world, including China, South Korea, New Zealand, Greece, France, Chile, Italy, Japan, and California. Because kiwis are so popular in New Zealand, many people believe that they're the number one kiwi-producing country in the world, but that would be incorrect.

The country where kiwis originated, China, is the leading producer in the world. They produce around 1.7 million tons per year. Behind China is Italy, with a little over 447,000 tons per year, and then New Zealand, with over 382,000 tons annually.

Some people avoid buying kiwi because the fuzzy skin is intimidating to cut around. But it's very easy to remove the skin, or you can just eat it if you want.

Whether you choose to eat the skin of a kiwi or not, here are some of the best ways to enjoy a kiwi:

Other Names for Kiwi

Kiwi is commonly known as, well, a kiwi in the United States. But there are other names for this fruit that you may not be aware of. Here are some of the other more common names for this fuzzy fruit:

Once kiwi started to become commercially distributed, it adopted the official name, kiwifruit, for exporting purposes in 1974 in New Zealand. Even though it officially took on the name kiwifruit in 1974, New Zealanders began using the term in 1962 to differentiate between the fruit and the animal.

Kiwi and the United States

You can buy kiwifruit pretty much everywhere in the United States. But since kiwi isn't native to North America, how this fruit got over here and became popular is an interesting story.

World War II is what made kiwi popular for many Americans. During this time period, many American and British soldiers were stationed in New Zealand, where they were exposed to kiwi for the first time. Eating the fruit regularly made it very popular with these soldiers.

Kiwi doesn't grow on trees like other fruits. In fact, kiwi actually grows on a vine. Kiwi vines can get pretty long. We're talking 33 feet in length! These vines tend to live for around 50 years, but they only produce kiwi for 30 of those years. These vines can produce anywhere from 50 to 100 pounds of kiwi per yield.